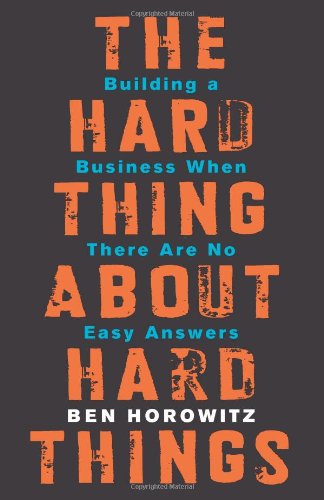 The book is written by Ben Horowitz, cofounder of Andreessen Horowitz and one of Silicon Valley’s most respected and experienced entrepreneurs.

I have gone through the first 4 chapters after purchasing from Google Books. It gives a good perspective to build a startup from scratch to IPO. Personally I know nothing about Ben previous startup LoudCloud. LoudCloud was a company built around the time of Internet Boom and survived across the Dotcom Crash. It introduced the concept of cloud computing in the early days.

When you try to build a startup in Hong Kong, you know that it’s never easy without the support of outside financial supports. The hard thing is swimming against the tide in the middle of the sea. A startup founder could only take punches as hard as she can. Ben illustrated the point very well when he got 400 – 500 staffs and the company kept bleeding. IPO was just a way to escape from going bankruptcy. The enormous pressure was so vivid that I can feel it.

IF you are building a company and getting stuck in the way, you should take a look at the book. Only if you can get passed the stumbling block you can reach another peak. Yea that’s the only way. You know that before you join the startup game, rite?

“What doesn’t kill make you Stronger “